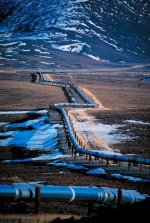 Alaska is one of the United States' leading oil producing states along with Texas, California, Louisiana, and New Mexico. Most of the oil comes from the far north and is transported southward by the Trans-Alaska Pipeline System (TAPS). In coming years there could be an expanded search for oil in the Arctic National Wildlife Refuge (ANWR) and other regions. Plus, there's an ongoing effort to build at least one new natural gas pipeline. Many people with hopes of landing an oil and gas job desire to work in an exciting, off-the-beaten path location like Alaska.

Crude oil production in Alaska has been going strong since the 1960s. Now there are plans to build a new natural gas pipeline that would bring gas from Prudhoe Bay to the Lower-48.

The Alaska state legislature awarded TransCanada a license for the Alaska Pipeline Project under the Alaska Gasline Inducement Act (AGIA), so after years of waiting the project began moving forward. The license was officially signed and presented in December of 2008. The company joined forces with ExxonMobil and has begun preliminary work on the pipeline which will take a circuitous route through Alaska, into Canada, and finally to the midwestern United States gas trunklines (actual route TBD).

This new gas pipeline will be among the largest construction projects ever undertaken and at the peak of construction will create thousands of welder jobs, pipeliner jobs, engeering jobs, and so forth. Jobs for Alaskans, non-Alaskans, as well as Canadian citizens. In total, government estimates project a need for over 9,000 workers.

The former Alaska governor, Sarah Palin, was a major proponent of the pipeline and vowed that most pipeline jobs will to to Alaskans. But experts predict there will be a major worker shortage. The same holds true for the Canadian aspect of the project.

On a related note, another pipeline project is taking shape as well. Learn more as an OilJobFinder member.

The Trans-Alaska Pipeline was built between 1975 and 1977 with the help of over 70,000 workers. The Alyeska Pipeline Service Company oversees operation of the pipeline and still employs over 2,000 workers. Keep an eye on Alyeska's website for employment opportunities related to pipeline repairs. You can also go there to learn all about TAPS and how it was built.

What The Future Holds For Oil In Alaska

We hinted at it above: big oil projects are underway in Alaska!

The U.S. government, particularly the Bush Administration, has tried like heck to open up ANWR to drilling. Either the senate or the house or both have repeatedly turned back efforts to start exploration and drilling. Although ANWR has been off the table (for now) the administration has found ways to open up other areas of Alaska for expanded oil production. With continuing shortages and increasing demand, for both oil and natural gas, it won't be surprising to see the natural gas pipeline gain approval along with more drilling in general.

As an OilJobFinder member you can be on top of Alaska Oil Job opportunities. Our researchers will continue to follow and report on all of the developments so job seekers know how and when to start applying.

Start Your Job Search Today!
Use OilJobFinder to help your find your dream job. There are thousands of open jobs right now. Simply click the button below to start your job search.
Find a Job Now!
Not a Member?
Join OilJobFinder!
Get Started!
Total Open Jobs
19,727
Jobs by Category