Work in the Kansas Oilfields

Oil and gas activity in Kansas is really starting to heat up, and the next boomtowns are springing up in southern Kansas, where large and small companies have been exploring an area called the Mississippian Limestone formation. 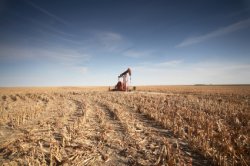 If you're thinking of getting a job in the oil and gas industry, Kansas may be the place to look.

Hundreds of workers are flooding into the Mississippian Limestone formation, or 'play,' a thick but porous limestone formation that extends 6000 feet below the surface of the earth, over millions of acres in northern Oklahoma and southern Kansas. If early estimates play out, Kansas may see 100,000 new jobs directly and indirectly related to activity at the Mississippian Limestone play.

Competition among companies for lease land is fierce. In Harper County and other surrounding counties along the south central border of Kansas, companies are offering farmers up to $1250 per acre - plus royalties - for the mineral rights that allow them to drill on the land, the same rights that were going for about $25 an acre early in 2011.

Oil companies first began exploring the Mississippian formation in southern Kansas in 2011. The fact that there is oil in this region has been known for many years, but vertical drilling spanning over 50 years was thought to have tapped this area out decades ago. However, new techniques like hydraulic fracturing and horizontal drilling have greatly revitalized drilling activity in the Mississippian Lime, and the play could provide thousands of jobs and industry activity for the next two or three decades, although its full potential has yet to be determined.

There are several companies considered to be major players in the Mississippi Limestone formation, including:

Find all the employers in the OilJobFinder member's section! You'll find a wide variety of jobs in the booming Kansas oil market, from laborer to management positions.

Oil jobs can pay very well and typically include benefits. In Kansas, even those with only a high school education can make $60,000 or more per year.

In Harper County, Kansas, oil companies have brought in more than 500 new jobs this past year, and many of these positions are being filled by out of state workers. To entice workers to come to Kansas and work in the oil fields, Kansas and Harper County have been offering incentives like income tax rebates for up to five years for those who move to the county from another state, and up to $3,000 per year toward student loans for college graduates who decide to move to the area.

For information on all the activity and the emerging job openings at the Mississippian Limestone operations, access your OilJobFinder Membership today!