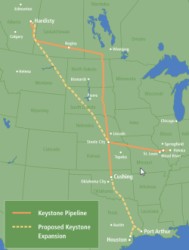 The Keystone XL Pipeline is a pipeline system proposed by TransCanada to transport synthetic crude oil from northeastern Alberta, Canada, to multiple destinations in the United States, including refineries Illinois, Oklahoma, and along the Gulf Coast of Texas, for export to Europe and Latin America.

It consists of two operational phases, and once both segments are completed, the plan is for American crude oil to enter the Keystone XL pipeline at Baker, Montana and Cushing, Oklahoma.

The project, which has been under review for more than three years, has been the target of numerous lawsuits from oil refineries, much criticism from environmentalists and members of the U.S. Congress, and President Obama formally rejected the TransCanada plan to allow for further study of its environmental impact, delaying a decision. The State Department has the authority to approve or reject pipelines that cross an international boundary.

Facts About the Keystone XL Pipeline

How many jobs would the Keystone XL Pipeline potentially create? It depends on whom you talk to.

The U.S. Chamber of Commerce said that more than 245,000 long-term jobs would be created in the United States. TransCanada estimates that if the Keystone XL Pipeline is built, approximately 13,000 Americans would be hired to build the pipeline, and another 7,000 manufacturing jobs and 118,000 "spin-off" jobs would be created.

The U.S. State Department's estimates were much more modest - up to approximately 6,000 jobs - and one independent review was even less optimistic, estimating that the pipeline would create fewer than 2,000 short-term construction positions in the U.S.

But critics of the project have said that the pipeline will run through America's heartland near water tables, wildlife sanctuaries, aquifers, fisheries, and farmland, and any spill would ruin the local habitat and endanger the health of Americans if the water supply was compromised.

By all estimates, the debate over the Keystone XL Pipeline is not over. Once approved both the oil and jobs will flow.

Stay Tuned! Check OilJobFinder for updates on the Keystone XL Pipeline and the jobs its construction may create in the future.