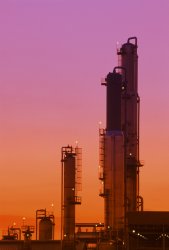 The Kearl Oil Sands Project, one of the most controversial oil projects in recent history, which started in late 2012 in the Athabasca Oil Sands region at the Kearl Lake area in Canada.

When ExxonMobil first proposed the project in 1997, recovery was estimated at 1.2 to 1.4 billion barrels of oil; in 2010, the Energy Resources Conservation Board revised those estimates to 5.5 billion barrels. The lifespan of the project is estimated to be more than 40 years, and will potentially provide thousands of oil sands jobs to workers in Canada as well as some in the United States as well.

What Are The Kearl Oil Sands?

The Kearl Oil Sands is an open-pit mining operation. It is planned for three stages, with increased oil production anticipated with each stage, from 110,000 up to 345,000 barrels of oil per day. Blended bitumen - heavy, black and thick oil - will be transported to the Edmonton area by Enbridge's pipeline system. Imperial Oil Resources owns about 70 percent of the project and ExxonMobil Canada owns the rest.

After the Kearl Oil Sands Project received approval by the Canada Department of Fisheries and Oceans, many critics have voiced their opposition to the plan. At least one lawsuit has been initiated and residents in at least two states are wary of the plan to transport "oversized loads" of prefabricated modules of oil extraction across U.S. Route 12, a narrow, winding road which crosses the Clearwater and Lochsa Rivers over Lolo Pass through Missoula Montana to Alberta, Canada.

Employers are trying to counter objections to the project with pledges of environmental sensitivity.

Workers arrived at the scene in early 2012 to begin constructing infrastructure including roads, power lines, foundations, and large-scale facility modules in anticipation for the target project start up.

During the construction of the Kearl Oil Sands project, most job opportunities will be through construction contractors - find their profiles and job listings in our Job Center.

You'll find a wide variety of potential jobs in the Kearl Oil Sands of Canada. Use your OilJobFinder Membership to be able to find out about all the activity in this huge oil project.

Start Your Job Search Today!
Use OilJobFinder to help your find your dream job. There are thousands of open jobs right now. Simply click the button below to start your job search.
Start Now!
Not a Member?
Join OilJobFinder!
Get Started!
Total Open Jobs
19,727
Jobs by Category